Six and a half years ago I was diagnosed with Prostate Cancer. I had been screened for some time having previously had multiple PSA* tests a negative Prostate biopsy and an MRI being reported as normal. This isn’t prostate cancer being missed but how screening works. After a passage of time I got a positive prostate biopsy result – Gleason** 3+3 = 6. (I don’t intend to go too deeply into the science and medicine of Prostate Cancer – rather that I wish to share a personal perspective as a patient. For further information https://prostatecanceruk.org/ )

PSA* – The PSA test is a blood test used primarily to screen for prostate cancer. The test measures the amount of prostate-specific antigen (PSA) in your blood. PSA is a protein produced by both cancerous and noncancerous tissue in the prostate, a small gland that sits below the bladder in men. All prostates produce Prostate specific antigen (PSA) is a protease whose function is to break down the high molecular weight protein of the seminal coagulum into smaller polypeptides. This action results in the semen becoming more liquid. PSA is produced by epithelial prostatic cells, both benign and malignant. PSA ‘leaks’ into the blood and can be found and measured in a blood test. Serum PSA is currently the least worst method of detecting localised prostatic cancer and monitoring response to treatment but it lacks specificity, as it is also increased in most patients with benign prostatic hyperplasia. This is to say PSA is NOT a measure of cancer – As men age their prostates enlarge – a process called Benign Prostatic Hypertrophy (BPH) A bigger prostate will lead to a raised PSA as will infection or inflammation – Vigorous exercise particularly a long cycle ride on a hard saddle can do this temporarily (often quoted as for 3 days), as can ejaculation. Currently there is no national screening program for Prostate Cancer. PSA is not good enough to fulfil the criteria for a screening test. I include this albeit somewhat tangentially because many patients don’t understand why especially when Cervical and Breast screening are offered to women. 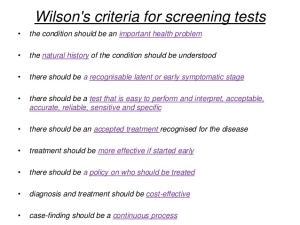 Prostate Biopsy – Most of these are now trans perineal – that is through the skin between the anus and scrotum rather than via the rectum. This reduces the risk of infection substantially.

Gleason** – The Gleason scoring system is the most common prostate cancer grading system used. The pathologist looks at how the cancer cells are arranged in the prostate and assigns a score on a scale of 3 to 5 from 2 different locations. Cancer cells that look similar to healthy cells receive a low score. 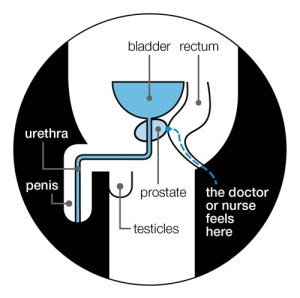 As the prostate enlarges it can induce symptoms which can be graded and provide some information as to the significance – have a look at the International Prostate Symptom Score.  So in primary care we have the PSA, the IPPS and lastly the Digital Rectal Examination (DRE) – The rear part of the prostate gland can be felt with a finger inserted into the rectum. It is becoming increasingly accepted that the value of this is less than previously thought so the resistance of men seeing their physician for a prostate check may now hopefully be diminished. I suspect that in future MRI scans will be the next screening test offered. 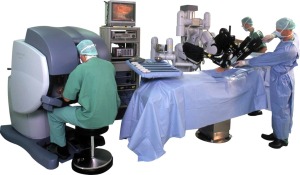 So on the 9th February I was operated on and had a Robotic Radical Prostatectomy and this allowed me to have only one night in hospital going home the next day having been stapled up and having a catheter. For those of you who think that keyhole surgery is likened to a locksmith picking a lock with tiny tools be informed – It’s rather more like the sample boad back at the shop showing off the locks and their keyholes available! Two weeks later I had a Trial WithOut Catheter (TWOC) and have been fortunate enough to have some bladder control albeit having to be careful coughing, sneezing, laughing and getting out of a chair!

I’m recovering albeit slowly. There has been issues with pain and discomfort, issues with the catheter and continence. There have been psychological downs too which have been as significant if not more so. Erectile function is likely to be something that will take some time to recover and ‘penile rehabilitation’ something interesting to contemplate! Back to work on Monday so some more semblance of normality after a month away!

I’m happy to answer questions and concerns but there is a huge amount of information out there. Probably the first place to start is Prostate UK. (Wherever you are!)